I've been reading today about two consequences of the sequestration in Congress that affected our National Park Service particularly in Minnesota, Wisconsin and North Dakota.  It reminds me of, though completely unrelated to, how the Minnesota government shutdown in 2011 affected people interested in the natural resources of our state by closing state parks and rest areas.

First, the St. Croix National Scenic Riverway in Minnesota and Wisconsin will not hiring nine park rangers this summers, a short article can be found here.  The rangers there are responsible for tasks that include law enforcement, safety, and monitoring invasive species among numerous other examples.

Second (and what really got me thinking), it was also announced is that the Painted Canyon Overlook located on Interstate 94 and a portion of the Theodore Roosevelt National Park will not be opening on April 1st as part of budget cuts resulting of the sequestration.  Over 290,000 people drove into the overlook from Interstate 94 last year and almost 71,000 people went into the visitor center.  Honestly speaking, there are not many better stops along the interstate in North Dakota than this particular location.  The Bismark Tribune describes the cuts here.

The Theodore Roosevelt National Park badlands area consists primarily of Cenozoic sedimentary layers that were deposited as sandstone, siltstone, shale and lignite coal.  The sediments comprising the different formations were derived from what is now Montana and Wyoming during the Laramide orogeny to the west.

Before Pleistocene glaciation, ancestral rivers of the area flowed northward, eventually ending at Hudson Bay.  The continental glaciers that advanced during the Pleistocene blocked these north-flowing rivers.  This caused the rivers to erode new channels to the east and south.  By the end of the late-Wisconsin glaciation, rivers like the Missouri and Little Missouri were now entrenched in new channels.  The Little Missouri flows through the Theodore Roosevelt National Park before merging with the Missouri River. 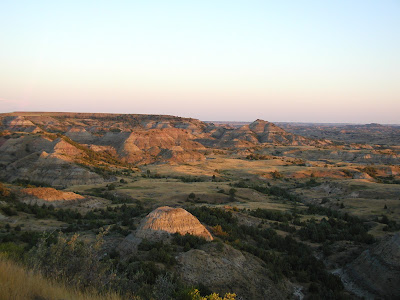 It was the Little Missouri river that was primarily responsible for forming the landscape seen at the overlook.  Approximate rates over erosion of the Little Missouri are between 1-3 cm for every 100 years.  According to the North Dakota Geological Survey, since the end of glaciation, approximately 200 km3 of sediment have been eroded and carried away from the area, eventually to the Gulf of Mexico via the Mississippi River.

Of course, for people who have a few hours or days, they can still visit the Theodore Roosevelt National Park.  It's unfortunate that the overlook will not be open for those who need a short break from the road and as a result, will not see one of North Dakota's best views.
Posted by Unknown at 7:00 AM 2 comments:

Sinkholes are in the news today, largely because of the sinkhole that swallowed and killed a Florida man recently.  Sink holes are also a relatively common occurrence in Minnesota.  In fact, the city of Fountain claims to be 'The Sinkhole Capital of the World".

Sinkholes mainly occur in three distinct ways in the state of Minnesota.

1.  Torrential rainfall washes out sections of roads.  An example of this is last summer's 10+ inches of rain on Duluth area causing numerous sinkholes across the city.  For a newspaper article of the event (including pictures of the sinkholes) click here.

2.  Water mains break, typically due to the freeze/thaw cycles during fall, winter or spring months.  A recent example from St. Paul can be found here.

3.  Due to dissolving of the carbonate bedrock found primarily in Southeastern Minnesota.  As passing groundwater dissolves the limestone/dolostone bedrock near the surface, it creates cavities that eventually cannot support the weight of the ground above and collapses.

In fact, you do not need to look very hard in Southeast Minnesota for evidence of sinkholes in Google Earth.  As sinkholes form in farmers fields, farmers continue to farm the land avoiding the holes.  Over time, trees and vegetation begin to grow from the bottom of these sinkholes, making the sinkholes easily seen.
Sinkholes (and caves, disappearing streamsare a feature commonly found in Karst landscapes.  A more detailed post written on the Karst landscapes of Minnesota can be found here.
Posted by Unknown at 11:28 AM 1 comment:

Last summer, I was able to acquire a GigaPan EPIC 100.  My primary goal was/is to take as many gigapixel panoramas featuring the geology of the state of Minnesota and other places as possible.  The long-term goal is to use these images in my Earth Science classroom, giving students opportunities to visit places virtually that they have not visited physically.

After learning the system and getting a total of four completed gigapans, Minnesota's winter set in, meaning individuals tend to be more housebound than normal.  There are numerous travel plans around the region this spring, summer and fall, the GigaPan EPIC will be in tow.

A week ago, my kids and I visited Minneopa State Park the day after a 5+ inch snowfall looking for a morning outside and even a little practice imaging as well.  The temperature was between 20-25 degrees and the trails were covered in the fresh snow.  We were heading to the highlight of the park, Minneopa Falls.

Minneopa Creek flows over the Cambrian-aged Jordan Sandstone, because of differential cementation within areas of the sandstone, two waterfalls are formed.  The upper falls consist of a six or seven foot drop before the creek continues to flow another seventy feet to the lower falls.  The creek falls 39 feet at the lower falls.  Minneopa Creek flows into the Minnesota river nearby.  The falls were formed as Glacial River Warren catastrophically discharged from Glacial Lake Agassiz approximately 9,700 years before present.  A knickpoint was formed and the waterfall has migrated upstream approximately 0.75 miles since then.

I was only planning on taking the one gigapan, so I brought two sets of batteries for the day (thinking that this would be more than enough).  The first two times the panorama was setup and pictures were being taken, I noticed that the camera was missing about every other picture.  Turns out that the button pusher was not pushing far enough down -- I had not correctly aligned it while wearing the heavy gloves.  Finally, on the third try everything was working well and the system was ready to take 218 images.  Two-thirds of the way through, the batteries were dying (good thing I brought the extra pair) so they were replaced, it was then that I noticed the focus was off.  I now have a gigapan that consists of most of the image off focus, but the far right side looking completely fantastic.  I did not upload it to the gigapan website.

Turns out my focus was off a little, I was trying to get the image and keep track of my three kids (ages 6, 4, and 2).  Simple mistakes were made, but at least I was able to get some still pictures and the waterfall will still be there for a later time. 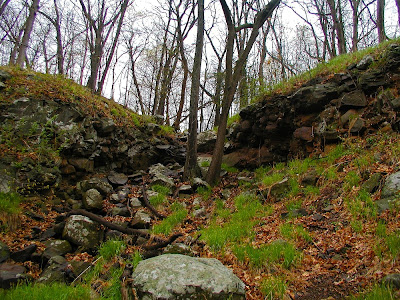 Within the Minnesota portion of Interstate State Park lies the informally named 504 million year old Mill City Conglomerate.  The picture above shows one of the outcrops of the conglomerate found in notches exposed through erosion. 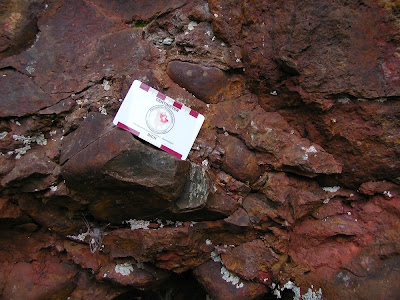 The conglomerate consists of basalt boulders cemented together by a reddish matrix of sand and silt.  The size of the basalt boulders and rounded edges indicates a high energy environment during deposition, though some fossils of trilobites and brachiopods have been found in the conglomerate.  Quite likely, the conglomerate was deposited on the shoreline of the Cambrian seas near basaltic islands.  The basalt is part of the 1,100 million year old Mid-Continent Rift System. 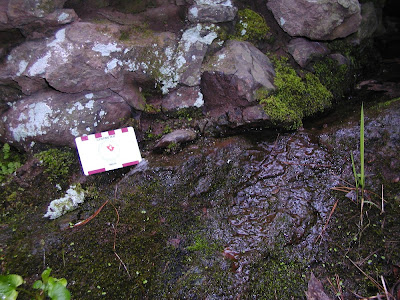 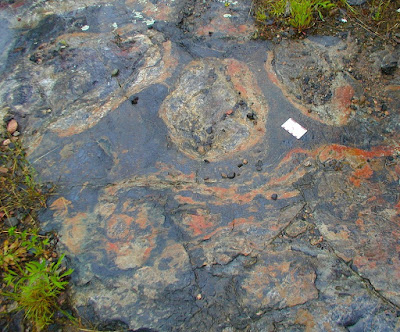 In northern Minnesota, the Biwabik Iron Formation was deposited 1,900 to 1,885 years old along the shores of the Animikie Sea.  At this time, surface water was busy eroding the continent located to the north bringing fine materials like silt and clay into this shallow sea that would later be incorporated into the iron formation.  Before the time of iron deposition though, reduced iron was easily dissolved and concentrated into the sea water because there was not free oxygen molecules in the atmosphere or seas at the time. 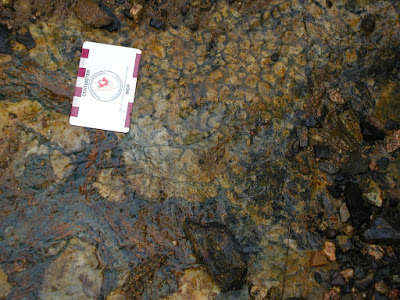 This was a unique time period in Earth's history, as photosynthetic organisms begin to appear in the rock record worldwide.  These organisms, called stromatolites, formed algal reefs along the shoreline of these ancient seas and as a waste product of photosynthesis, produced oxygen.  It is this oxygen that caused the iron to precipitate out of the seawater and be deposited as iron.  This time period is called the Great Oxidation Event (GOE) and is responsible for most of the iron deposition throughout the world. 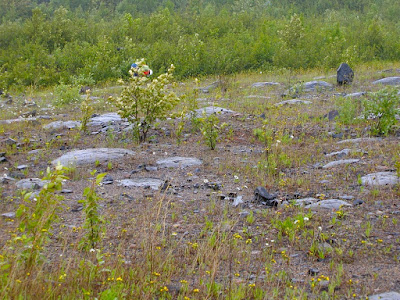 Each domed structure above would have been an algal mound located at or near the surface of the water 1,900 years ago, busy precipitating iron to the seafloor as a consequence of photosynthesis.  This particular field of stromatolite domes is found within an inactive iron mine and is being preserved, there are no future plans to mine the iron in this location.
Posted by Unknown at 12:27 PM No comments: 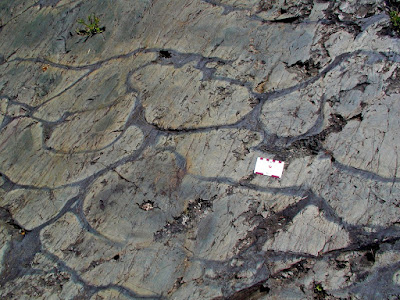 In Gilbert, Minnesota, is a site of 2,700 million year old pillowed greenstone.  Basaltic lava would have originally have erupted into an ocean or sea forming rounded structures called pillows.  Through weak metamorphosism, involving higher temperatures and pressures, original minerals found in the basalt like plagioclase and pyroxene changed to chlorite and epidote.  The edges of the pillows have crystals much smaller than the interior.  As the lava erupted into the colder water, the edges cooled faster resulting in small crystal growth, while the interior cooled relatively slower resulting in larger crystals. 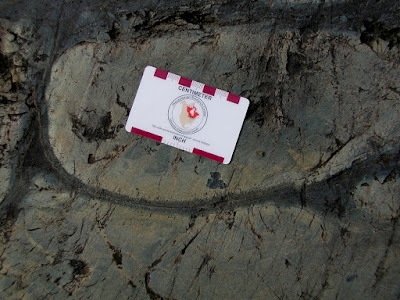 Much later in time, during the late Wisconsin glaciation, glaciers from the Rainy Provenance scoured the area, largely cutting the pillows in half and leaving numerous striations across the pillows.
Posted by Unknown at 5:38 AM 1 comment: 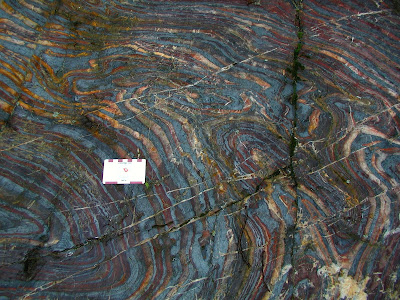 Very near the Soudan Underground State Park administered by the Minnesota Department of Natural Resources is what some people call 'the most photographed outcrop in the state.'  This is a pavement outcrop of folded banded iron formation.  The outcrop consists of metallic hematite, red jasper and white chert.  These originally horizontal layers have been folded multiple times.  In some areas, the jasper and chert have fractures filled with milky quartz. 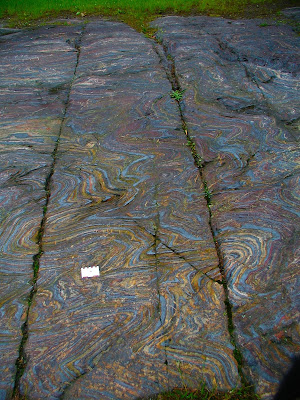 The picture above gives a larger sense of scale for the site.
Posted by Unknown at 4:55 AM No comments: 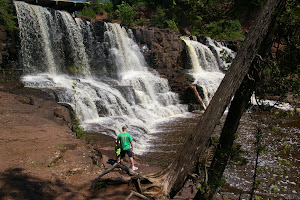